Doing a build in need of some recommendations:

Splurged on an Asus 34" PG348Q and Poseidon 1080 Ti. Was originally considering the Corsair Air 540 or Fractal Node 804 but I think I'll stick to a tower case, something shorter than my Carbide 500R, with tempered glass. This one looks pretty good: Thermaltake View 31 RGB

For water - I've never set up custom water loops before... is https://www.ekwb.com/ a good place to start with? Don't have mobo yet but I'll stick with something from Asus.

Yes ekwb is a decent place to start to get an idea of what you need.
Look up singularitycomputers on YouTube. He has plenty of watercooling tutorials for newbies.
Reactions: suklee
S

Seeing how tempered glass & RGB is all the rage now I'm considering the Corsair 460X case paired with this ROG Rampage VI mobo (EATX). The In Win 909 looks really nice but slightly too large for me.

Do I need anything else?

Edit: these 2 are my front runners: Corsair 460X or Carbide Air 540. Trying to figure out pros & cons of each

This is what ekwb's configurator came back with: umm i do not recommend that radiator.
Slim rads are horrible....

Was wondering about that, with the mid tower case the custom configurator spat out the slim line - Whereas in the fatter cube (Air 540) there was enough space for 2 radiators, one at the top and one at front (non slim). I really like the Air 540, except the width is a bit too wide to fit on my computer table/stand which is max 9.5"... The 540 is 13" wide.

This was the suggested config with the Air 540: the 1080 Ti Poseidon has a built in waterblock, and thus vga block not required from ekwb (is this correct?)

I see Threadripper is causing quite a stir and making me consider AMD again, but it'll still be an Extended ATX motherboard.

Yes the Poseidon is a preinstalled waterblock.
however its sort of a hyrid block.
I honestly would not recommend it.
Id rather get the Stryx Card and waterblock seperately.

If i was lazy, i would get the Gigbyte version which has a real eK block preinstalled:
GIGABYTE AORUS Xtreme GeForce GTX 1080 Ti Waterforce WB 11GD
https://www.newegg.com/Product/Product.aspx?Item=N82E16814125988

Seeing how your pricing things in USD...
You can also shop at http://www.performance-pcs.com
Gettings items will probably be faster and cheaper on shipping due it to being all stateside.

aigomorla said:
I honestly would not recommend it.
Click to expand...

I'm just waiting til those new motherboards come out, yet to decide on a case. Will check out XSPC as well, thanks for the recommendation!
S

aigomorla said:
umm i do not recommend that radiator.
Slim rads are horrible....

If it can fit everything, I'd like to to go mATX: Phanteks Evolv mATX with TG + mATX ROG 270G motherboard. worried about clearance between GPU and front radiator. My 1080Ti is 298mm long while the case can accommodate maximum GPU of 319mm. That's only 2cm of clearance. Is that too little? These guys seem to have trouble fitting 2 radiators: https://youtu.be/dOAX32POAas?t=8m21s
H

I have a setup similar to what you are looking at and have a Corsair Air 540. It's a pretty good case for water cooling, but not perfect.

I have those exact radiators (360 PE, and 240 PE). I have the 360 mounted on the front with a pull setup, and the 240 mounted to the top with a push setup. I had to drill holes for the top radiator because it will not fit in the pre-drilled holes unless you setup the front 360 in a push configuration with the fans on the outside of the case frame (but still behind the front cover), and get rid of the dust filter. I also have the pump and res in the power supply chamber, and they are not visible. You could probably set them up in the motherboard chamber, but it would be either a very tight fit depending on the graphics card, or a weird configuration.

I'm looking at moving this system into a Fractal Design Define S case. I think it would work better for my radiator setup, and allow me to move the res so that it can be seen. It would also fit on my desk a little better.

I've not used an Evolv personally, but have heard some people say it's not great for water cooling. Jayztwocents did a video on it:
https://www.youtube.com/watch?v=o6UAjQmg9Ho

It looks so sexy though.
S

I saw the Air 540 in person, very nice case but too bulky for my space. I need to stick to matx or mid-tower ATX .. Define S is roughly the same size as my Carbide 500R, which is OK but would like to downsize, if possible.

I'm leaning towards the Evolv mATX case and then see what I can do with water cooling... if slimline rads are the only ones that will fit nicely I may just have to go for those?

I have the Gigabyte Aorus Gtx1080TI with WB and it is outstanding.
S

Finally got all my parts - went with the Phanteks evolv mATX, but the length of the GPU is proving problematic...

Could I just use a single fan on this front radiator? 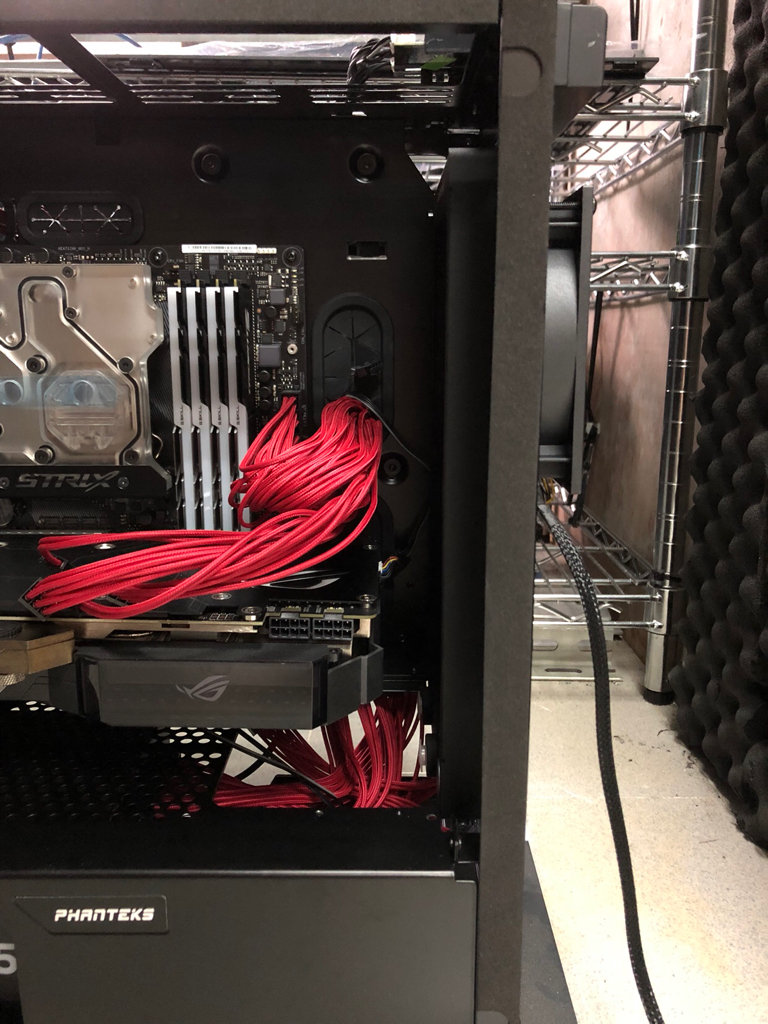