I just got a new wireless router because my modems built-in wasn't cutting it for parts of the house. I attached a diagram below. Rather than plug the modem into the "internet" port on the wireless router, I plugged it into port 1 This way everything is accessible from my main computer (like through RDP/Putty etc). The modem does not act as DHCP, I use a PiHole for that running on a virtual machine. So all the traffic is routed through there. Before I plugged the wireless router into the modem, I was able to get into the control panel by plugging into a port with a laptop and accessing it through the browser. However, ever since I hooked it up to the modem I cannot get onto the CP anymore and I need to make some changes.

I've tried different ports on the router, but whenever I hit 192.168.0.1 it just pings my modems control panel. Navigating to the IP the DHCP assigned it also does not work. Setting a static route does not work. It seems as if I can change the port the modem plugs into to the "internet" port instead of port 1 and it will work that way but then I am unable to access devices connected to it since my PC is plugged in directly to the Modem. I can't even ping those devices. I thought using a separate DHCP would make this not the case but that didn't seem to work

Does it make sense what i'm trying to do? I'm basically using the TPlink as a router/access point but I want to get into the control panel and make some changes, but am unable to do so on the current config Is there a better way to be doing this? I want to be able to RDP into stuff that's connected to the wireless router. 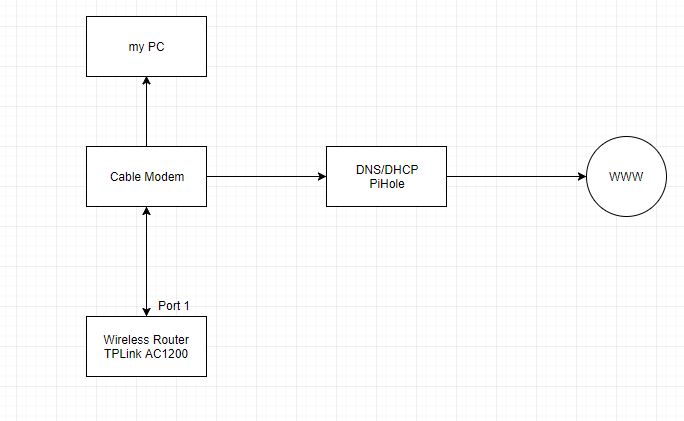 Delete this, I figured it out. The remote access port was set to something goofy for some reason, changed it back to 80 and I can now access it.

if your cable modem is only a modem, wjat your trying to do is incorrect.

if you cable modem is also a "gateway", aka modem and router combo, then what your doing will work, but you dont want to use the tp link as a router, just a WAP/switch
You must log in or register to reply here.
Share:
Facebook Twitter Reddit Tumblr WhatsApp Email Link