Hulk said:
If you're up for it let's try it with a more rigorous approach. Instructions below if you want to post a score.


1. Use the following version of Handbrake with the built-in h.265 mkv 2160p60 preset
HandBrake-1.3.3-x86_64-Win_GUI.exe
Once this current version is replaced you'll be able to access it from the following link.
HandBrake: Nightly Builds
Nightly builds of HandBrake

2. Report average effective clockspeed using HWinfo - https://www.hwinfo.com/
I'm sure there are better ways to do this using the logging feature but here's how I did it. I downloaded the portable version, which runs from the exe file.

Run the exe and select "sensors only." You only need this window open.
Minimize the sensors window so you can have it and Handbrake visible at the same time. Select the "average effective clockspeed" line so you can spot it easily. It will highlight.
Note the icon for "reset min/max/average values and timer" in the bottom right area of the window, it's the clock icon.

Start the handbrake but don't start/reset the timer until handbrake is actually encoding video. Record the average effective clockspeed right before handbrake finishes the encode. It should settle in pretty quickly after the encode starts and not change during the encode.

4. Report your encoding time and CPU model
Click to expand...

sdifox said:
et voila. we can all host the file and round robin it 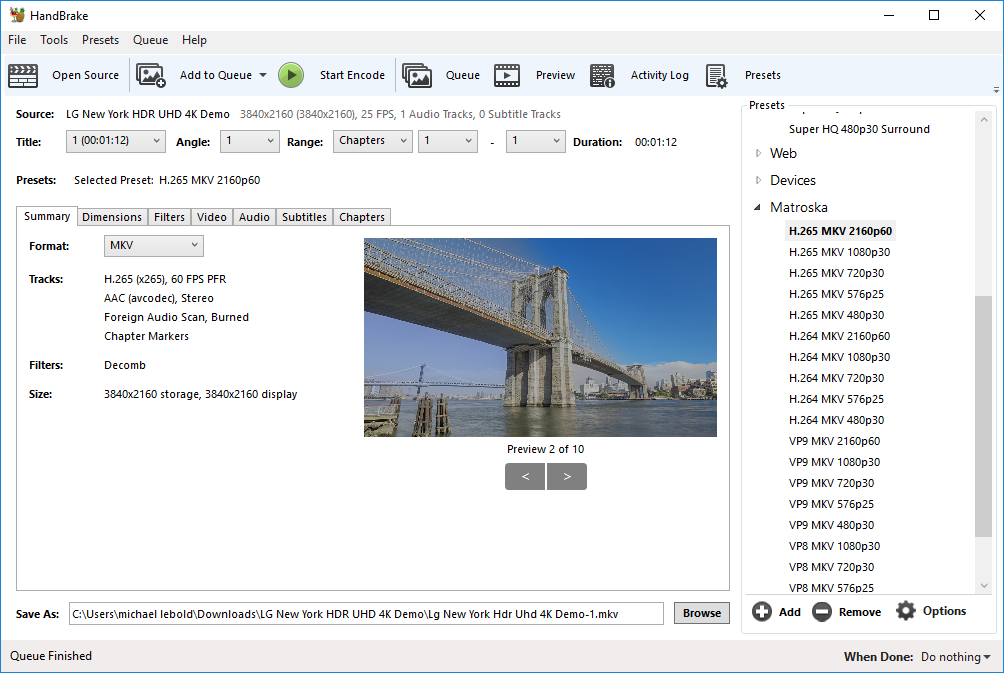 (if you're upgrading and don't see that preset, select "Reset Built-In Presets" under the Preset menu)

As before, go into Handbrake's Preferences, make sure QuickSync Decoding is unchecked under Video, and check the box to put a copy of individual encode logs either with the same location or in a specified location.

Report your results with your processor, stock/overclock speed, operating system, and ram speed/amount. I'll pull the results into a spreadsheet and update this OP with the leaderboard from time to time.
Last edited: Dec 9, 2020

BTW, on both computers, after running the test and exiting the application, boinc would not go over 50% CPU usage. I had to reboot the computer to get things back to normal.

Not bad. I'll be killing some applications and doing additional runs to see if I can shave off a few seconds.
Last edited: Apr 28, 2018
Reactions: lightmanek

I don't have the best overclocking chip and I did not want to bother delidding it. My AVX offset has to be 4.5Ghz for stability and my score reflects that. This is mostly a gaming system and I don't use AVX enabled programs regularly so it's fine for me. A couple hundred Mhz isn't a deal breaker at all.
Reactions: lightmanek

By "at stock" do you mean full stock with tdp limits throttling your core speed down to ~3.5 GHz or do you mean multicore enhanced 3.9 Ghz under load?
H

Can you post a snapshot of thread usage while running the test? I'm curious to see how many cores are actually being used.
C

I ran the benchmark on a few machines. I thought it would be interesting to see how some of the older and cheaper ones manage.

Without these tweaks (relaxed EDC and performance bias) sure, you can clock higher at the same voltage but then you end up at about the same final performance in this test so I leave them on. On other tests...