What's the story behind these? 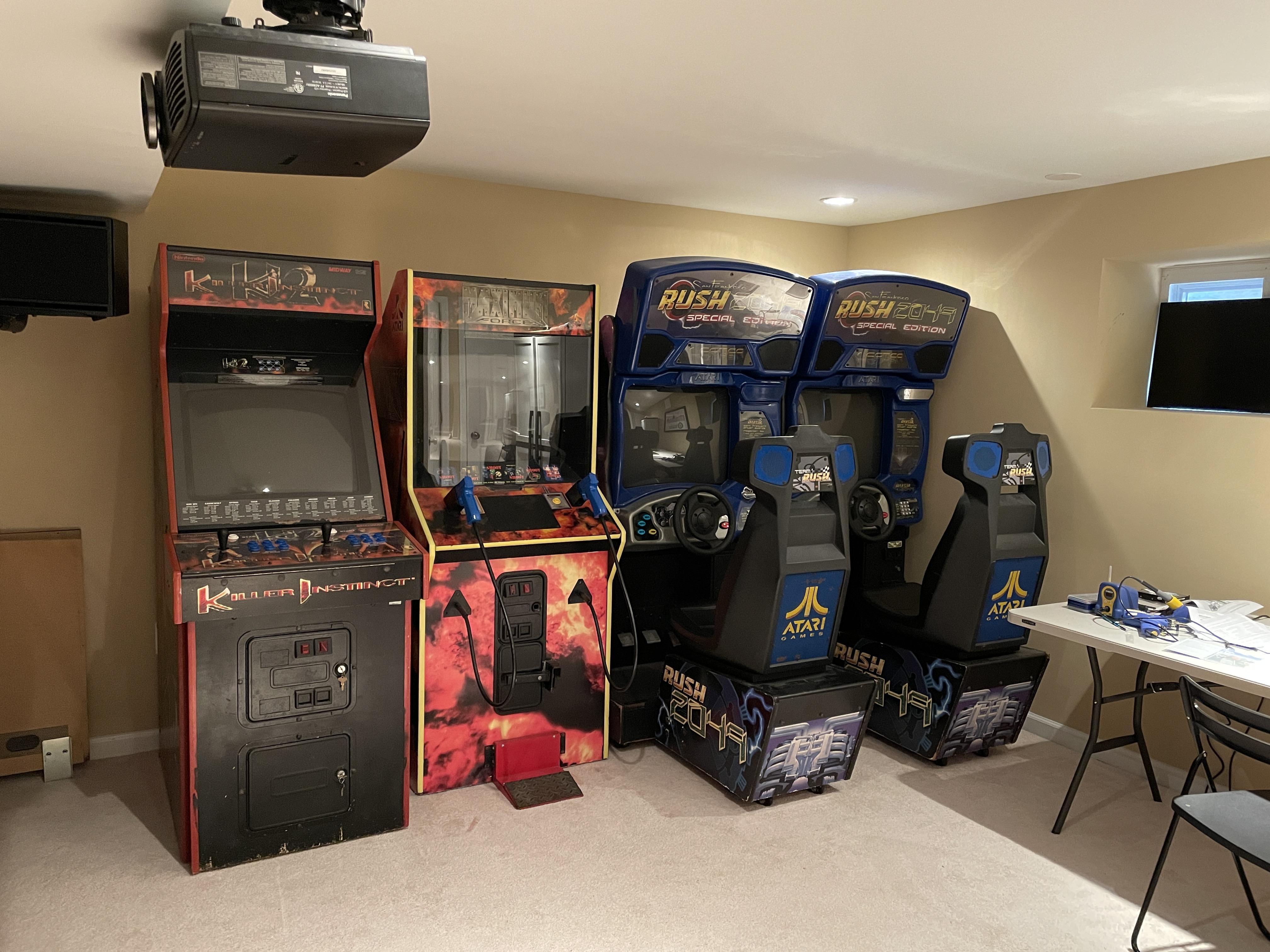 Killer Instinct 2 currently has a Raspberry Pi3 B in there with a pi2jamma interfacing with the cabinet. So it's a MAME cabinet right now. I can put it back to stock very easily though once I fix my KI2 board. I also have KI1, MK1, and MK2 that are all working and plug/play easily into it.

Maximum Force cabinet was a pretty big project. I have an 8 way JAMMA switcher in there and there are 7 boards inside of the cabinet. I built "shelves" to mount them all to inside of the cabinet. The 8th slot is external and I have a longer cable running on top of the Rush 2049 SE cabinet right next to it, so I can swap games on the 8th slot without having to go inside the cabinet and open it up. I have like 15 or 16 light gun games now I think.

Then both Rush 2049 SE cabinets are just 100% stock and linked together.

I don't really have more room down there or else I'd probably get a trackball cabinet. I may have a lead on a cheap pinball machine too but I don't know if it's going to actually come about to anything.
Reactions: digiram and funboy6942

My kids and I took it down and painted it black. I plan on put in a Mitsubishi Diamond crt in it and the 13 out. I just traded for another xbox ok, so I am going to mod it and put a larger hdd in it. I have since found old new stock light guns for the OG XB.

I have plans of sticking a Pi on it at some point, and I bought all new 2 players buttons to hook up to it. I plan on making a pc emulation/Game rig, and getting my pool tables on it, for I have extra buttons top put on the side for pinball games, but at some point need to buy a plunger.

My main rig, I took 3 mounts, made one so I could spin a 50" 4k Monitor for pinball over there, and vertical arcade games.

The legend I bought cheap open box off ebay, for I have read I can put coinops on it, and I like to do that soon, for it has the trackball and the sticks, and pinball buttons stock on it, and would love to play pinball on it, for I have a ton of tables and are my favorite to play.

I'm jelly of your home theater.

I did it all on the super cheap Aside of my record player, though it was new still only got it off ebay for like $35 or so for they thought it was broken, and I like to fix stuff, so I had no problems buying it at that price, but no clue what the heck they was talking about with the listing for they even said the needle was broken, and it wan not :O
But other then that its all used stuff I have gotten really on the cheap I repaired, OH aside of the stereo stand, got that new off Amazon for $100 shipped.

I have since done up my room, and did things different with my tv, for I did not like the mounts I had to make out of 1 out of 3, and had to use zip ties to hold the 50 in a vertical position. Now I have it made from a much stronger mount for a 50, but made from 2 mounts so it will now spin without the need of using zip ties and look like poo

I have now added yet another vintage "tv" t and set up into my room for I was given a 55" old crt tube high def with hdmi, thats 720P we moved my 360 and OG xbox to to do some larger then life tube gaming. And I have also gotten from the same people a 19" PC CRT to put in my arcade (have not done yet) to replace its old crt 13" tv, so games off my pi soon, and the built in arcade unit, will look its best, for I have a YWR to hdmi, a 3 in 1 out hdmi switch, and a wire that goes from HDMI to VGA, so it will be the best pic I can do with that monitor, looking much better then the lousy tv ever could, for to my eyes it looks like poo.

Not really looking to make anyone Jelly, its just in my situation I been in for almost 20 years, and the fact lately because of it I had to give up my passion of over 40 years, and needed something to do to keep my mind going and off crap, that now this is what I been doing with the help of my son, for if it was not for him I never would be able to do most of all this stuff, he been a HUGE help. I am having more fun figuring this stuff and, and seeing if I can make it work, what to do to make it "look" and run cool, and then when done, pretty much never touch it again, mostly just a can I do it, I read about or watched a video, and thats it, now to figure it all out on my own with no further help at all, and for the most part, think I nailed it.

I never in a million years however thought there was a big difference between like a mid to low units of home theater, for I been doing that pretty much since I was a kid, and in my young adult life got a Dolby prologic (not PLII this was the first when it came out), and at that point I was hooked even more when I watched my first movie on a HUGE 32" crt tv (no flats, yeah Im that old), and heard stuff in my movies from behind me. But now that I won a Marantz SR5010 off goodwills site for $400, and its kinda a better then mid upper crust unit, and my full vintage DCM speaker set up in 7.1, replacing my denon, then replacing my onkyo, and now having this, HOLY GEEBUS, there is a for sure difference if you have the money, this things hits hard and beautiful, and going to cry the day it dies
I have had pretty much every brand of receivers out there, but I could not pass a $1200 receiver for $400, with 7.1 analog INS NO LESS, sound as sweet as it does when I play games, watch movies, or listen to music, it pulls it all in, and if you have the means I HIGHLY recommend you get something close if you are into the stuff like me.
D